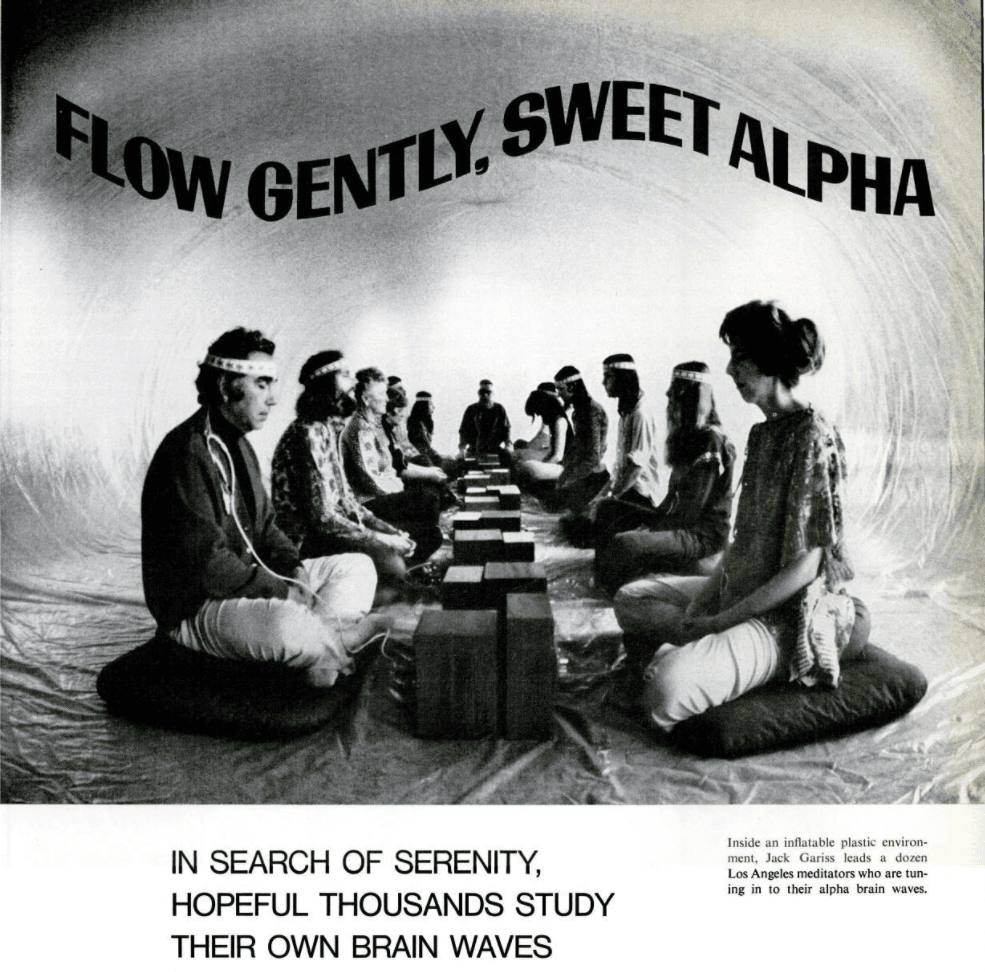 Strictly speaking, the term alpha brain waves refers to neural oscillations in the range of 8 to 12 hertz. In many instances, however, the term connotes much more than a particular waveform. Through a combination of scientific and cultural factors, alpha has come to signify relaxation, tranquility, and even spirituality. Below, we offer a brief history of alpha waves, with the goal of contextualizing modern interpretations of the rhythm. This history also provides important guidance for navigating current trends in consumer neurofeedback technology.

What is a Brain Wave?

Human thoughts, emotions, and behavior all arise from the electrical activity of brain cells,  called neurons. When a neuron “fires,” or becomes active, a bioelectric current ripples through its axon. When many cells fire at the same time, electrodes on the skull can detect this shift in voltage—a process that forms the basis of electroencephalography, or EEG.

A typical EEG chart reveals rhythmic crests and troughs, reflective of rising and falling voltages in groups of neurons. These dynamics are sometimes called “brain waves” and are typically measured in hertz (hz), or cycles per second. This sort of brain wave taxonomy has proven useful to researchers studying various aspects of mood, cognition, and sleep. Yet, over the years, the various wave classes have come to mean more than their designated frequency ranges. Popular accounts often imbue waves with distinct, almost human-like traits: alpha is tranquil, beta is focused, gamma is perceptive, and so forth.

A 1997 article in Scientific American, for example, asserts that beta brainwaves are generated “when the brain is aroused and actively engaged in mental activities.” The author contrasts this frequency with alpha waves, which he associates with “non-arousal”-- a relaxed, calm, resting state. Finally, he notes that delta brainwaves arise during “deep dreamless sleep” (Herrmann 1997).

Whereas the reputations of alpha, beta, and delta waves are somewhat consistent across popular literature, gamma and theta brainwaves seem to have more malleable personalities. Theta waves have been associated with a “twilight” state between sleep and wakefulness, and sometimes receive credit for encoding long-term memories. Gamma waves have been linked to enhanced perception, problem-solving, and, among more extravagant interpretations, a loving mental state (Abhang 2016; Brainworks).

In most cases, the reputations of brain waves do relate to genuine science, however loosely. Gamma waves, for example, have been shown to play a role in perception across several sensory modalities (Doesburg, 2005; Rieder 2011; Steinmann 2014). Yet, the function of a given frequency range cannot be reduced to a single mental function; and, correspondingly, most mental tasks will involve multiple types of brain waves. In short, the attribution of personalities to oscillations fails to capture the complex reality of neural dynamics.

Among brain waves, alpha receives by far the most attention. Associated with inner tranquility, the rhythm is often pursued by meditators and other serenity-seekers. But how much of this reputation derives from science? And how much amounts to cultural sensation? Here, a bit of history is useful.

When Hans Berger documented alpha waves in 1929,  he speculated that they might play a role in conscious mental processes, but avoided definitive statements on the topic (Berger, 1929).

Five years later, Lord E.D. Adrian and Bryan Matthews confirmed the existence of alpha and noted that the rhythm was easiest to ascertain when they placed electrodes above the occipital lobe, which is involved in visual processing. In fact, Adrian and Matthews observed that the rhythm was stronger when subjects closed their eyes (Adrian 1934). The pair concluded that visual input somehow interferes with alpha—a finding that has since then been abundantly validated.

During the early days of EEG research (the 1930s and ‘40s), many experimenters focused their attention on alpha, likely due to the fact that it was the easiest frequency to record with the instruments available at the time. This initial flurry of experimentation yielded a wide range of conclusions about this type of brainwave and associated the rhythm with all manner of mental functions. In 1939, for example, Dr. George Kreezer claimed to have found a link between certain alpha wave variations and low intelligence (Kreezer 1939).

It wasn’t until the late 1960s and early 1970s that alpha gained a more relaxed reputation—a shift that can be attributed, in large part, to the work of psychologist Joe Kamiya. He believed that if subjects could learn to recognize certain brain rhythms, then they could also learn to produce those rhythms on command. In Kamiya’s experiments, EEG-wearing subjects would hear a particular tone whenever their brain produced alpha brainwaves; over time, some subjects indeed improved their ability to generate this rhythm at will (Stoyva 1968,  Kamiya 2011).

Attempting to explain how they maintained alpha activity, Kamiya’s subjects described strategies like “letting go” or “relaxation” (Knowlis 1970). These early experiments would prove influential on multiple fronts. From a scientific perspective, they offered proof of concept for neurofeedback therapy and inspired decades of research and practice in the field. From a cultural perspective, they established an early link between alpha waves and subjective serenity.

Alpha Brain Waves and the Counterculture

Adrian and Matthews concluded that alpha dominates when the brain lacks visual stimulation. Taking this finding a step further, Kamiya showed that the waves fade when subjects merely imagine visual scenes. He explains:

All those who had taken part in the experiment described various kinds of visual imagery or “seeing with the mind’s eye” as occurring in the non-alpha state. The alpha state commonly was reported as “not thinking,” “letting the mind wander,” or “feeling the heart beat.”  (Kamiya 1968)

Put another way, Kamiya found that subjects were able to increase alpha by closing their eyes and clearing their minds—a state conspicuously similar to meditation. This similarity was not lost on Kamiya, who happened to publish his research at the same time that Eastern meditative rituals were gaining popularity among the American counterculture.

Working out of Northern California in the late 1960s, Kamiya’s lab was located at the heart of the hippie movement and the human potential movement. Within this cultural milieu, alpha quickly acquired a transcendental, spiritual connotation—a connotation that Kamiya himself embraced.

Writing in Psychology Today, he drew parallels between his experiments and meditation, noting that “seven practiced Zen meditators” participated in the trial and seemed to excel at producing alpha. In the piece, Kamiya also portrayed the alpha state as a relaxing experience--and one worth pursuing. He continues: “People describe themselves as being tranquil, calm and alert when they are in the alpha state… Some of them asked us to repeat the tests so that they could experience once again the high alpha condition” (Kamiya 1968).

During the early 1970s, alpha’s groovy connotation rippled through the counterculture and, eventually, into mainstream media. Journalists often emphasized alpha’s role in meditation and, at times, likened the alpha state to a mind-altering, drug-like high (Leslie 1970). As a result, alpha’s following grew and its reputation as a relaxing rhythm solidified. Summarizing this trend, a 1971 article in the New York Times describes:

This rhythm, which is observed occasionally in sleep, and during yoga and Zen meditation, is known as the alpha rhythm. Because it has been recorded in people while they were experiencing pleasurable relaxation or meditation states...a cult has been growing up around the “alpha state.” (Luce 1971)

Perhaps to feed a growing appetite for alpha, a number of manufacturers developed first-generation consumer neurofeedback devices. Known as “alpha monitors,” these simple EEG apparatuses alleged to provide audible feedback when a user’s brain produced alpha waves, thus reinforcing the frequency and providing a form of technologically-guided meditation. By 1975, an individual interested in purchasing an alpha monitor had at least 16 options from which to choose (Schwitzgebel 1975). While the customer base for these products remained limited to a niche group of meditators and technical hobbyists, cultural infatuation with alpha waves was more widespread. In 1974, the L.A. Times asserted, “It’s an ‘in’ thing to worry about your Alpha brainwaves—those associated with what might be called a state of ‘attentive relaxation’” (McGuinness 1974).

For a brief moment, the alpha wave was a veritable celebrity; and though its fifteen minutes of fame eventually ran out, alpha remains associated with relaxation to this day. As such, alpha’s origin story can be instructive for researchers and consumers attempting to make sense of modern trends in neurofeedback. (Shure 2018) First, alpha’s history betrays a human preference for simple, sensational answers—particularly when it comes to brain science. It also reveals the ways in which a cultural ambience can influence our understanding of EEG science. As neurotechnology assumes a more prominent role in society, this interplay between science and culture may prove consequential.

The Legacy of Alpha Brain Waves and Modern Neurofeedback Devices

Half a century after Kamiya’s experiments, EEG-aided meditation is once again in vogue. Yet, that is not to say that modern devices are equivalent to those once used by technologically-inclined hippies. For starters, early alpha monitors often consisted of only one or two electrodes, severely limiting accuracy and reliability. Modern products, by contrast, usually have at least 6 electrodes, and often many more than that.

Moreover, whereas first-generation devices responded only to the presence or absence of alpha, modern products may apply targeted algorithms to compare brainwave frequencies recorded from numerous brain regions. And, as EEG data processing improves, feedback protocols will likely prioritize signal features more complex than broad categories like “alpha” or “theta.”

EEG headsets on the photos above: Bitbrain Diadem, Hero, and Air. Mobile and wearable dry-EEG systems with optimized designs to facilitate the user’s natural behavior in real-world environments for scientific research purposes.

While alpha feedback remains an active area of study, researchers are now investigating its application in more diverse contexts, such as for the management of ADHD or PTSD. (Escolano 2014, Wahbeh 2013). In these cases, the application in question will dictate the EEG electrode placement; and best practices may call for the recognition of inter- and intra-subject variability, a distinctly modern facet of neurofeedback, which has been discussed previously on this blog.

In short, “alpha feedback” can now refer to a large range of experimental paradigms and mental health objectives. As such, the “alpha state” cannot be reduced to one particular function, mood, or mental capacity. Here, it should be noted that, though consumer neurotechnology has improved significantly over the years, newer tools are hardly infallible; and hype about these instruments often overstates their capabilities.  Much remains to be learned regarding how to optimize consumer devices; and the quality of currently-available products varies dramatically. Given as much, consumer education and expectation management are vital.

Despite advancements in EEG science, popular understanding of these tools remains limited. And as neurofeedback becomes available to more people, misperceptions about the power of brain waves could have real consequences. For example:

With proper caution and responsible communication, these risks can be mitigated. Researchers, marketers, and journalists must do their part to educate the public about advances in neurotechnology and, in doing so, should avoid oversimplification. Science communicators must also remain aware of the ways in which cultural biases can influence the interpretation of results. There is reason to be excited about the next generation of neurotechnology. However, that excitement should be informed by science—not sensationalism.

Caitlin Shure is a scholar and writer exploring the intersection of neuroscience, technology, and society. Her research investigates the cultural and ethical implications of modern neurotechnology, as well as the historical provenance of these tools. Based in New York City, Caitlin writes about brain-computer interfaces, neuroethics, and other brain-related fields.