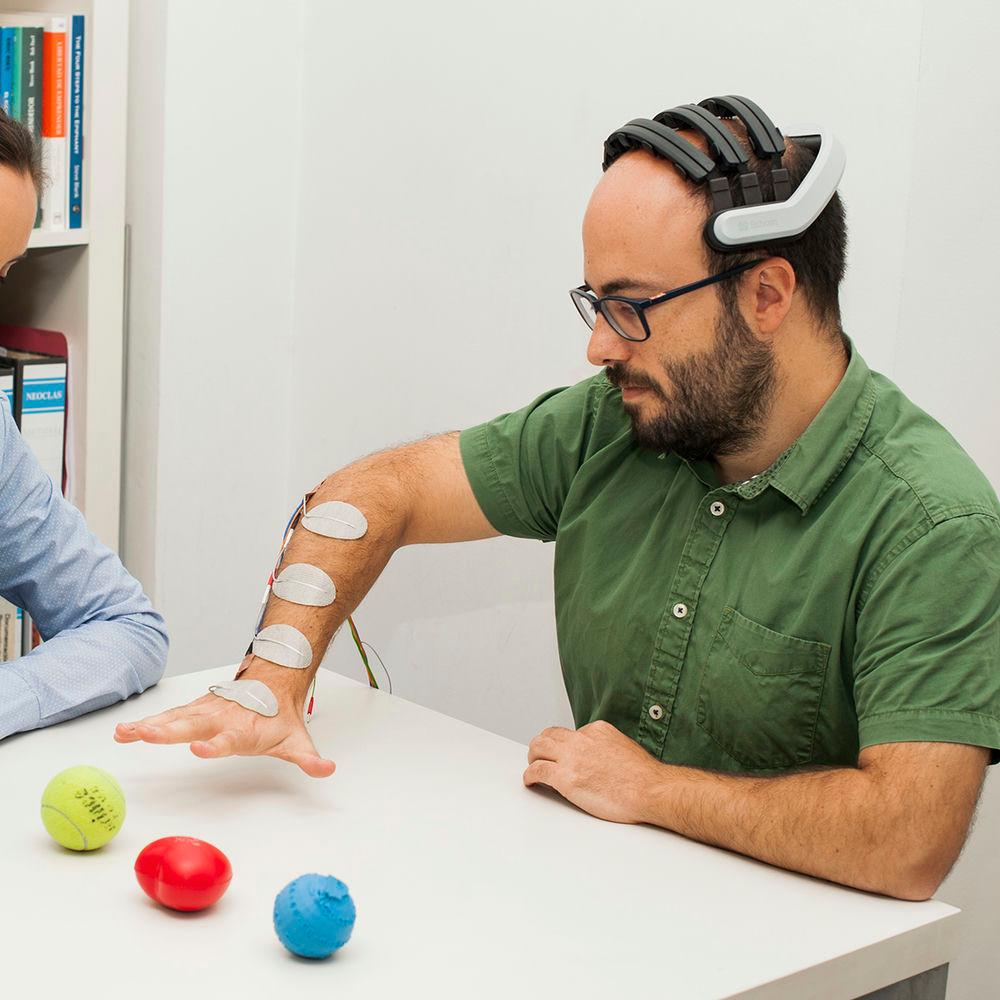 Neurorehabilitation and assistive technologies use brain-computer interfaces (BCIs) to involve the central nervous system in the rehabilitation process or to allow control of technology. Moving BCI-based neurorehabilitation or motor restoration applications from the laboratory to home settings will improve accessibility to therapies and assistive applications. This will increase potential benefits and allow a more intensive data collection to foster scientific progress. The EEG equipment itself has been identified as a key technology required to enable such a transition and to increase acceptance from the end users. We describe a new wearable dry-electrode EEG system specifically designed to ease the transition to the user’s home. This device has an optimized minimal number of sensors for maximum comfort, extremely fast setup time, and carefully designed aesthetics. We’ll present recent results evaluating its performance to decode motor-related brain patterns.

BCIs for motor rehabilitation and restoration

One of the most promising high impact applications of brain-computer interfaces (BCIs) is to restore movement for people who have paralyzed, impaired or diminished motor control of their limbs. This lack of control can be due to several causes including stroke, spinal cord injury (SCI), traumatic brain injury (TBI), Parkinson’s disease, amyotrophic lateral sclerosis, multiple sclerosis, and others. Due to the high prevalence of some of these conditions (e.g., stroke has been identified by the WHO as a health priority (Johnson, 2016)), millions of people worldwide suffer from motor impairments which drastically decrease their autonomy and quality of life. Consider how basic everyday actions such as personal hygiene, feeding, dressing, or socializing are hindered when you cannot grab objects. Patients usually have to rely on family, friends or home health aides to perform daily life activities.

Motor rehabilitation therapies seek to recover the lost motor capacity to achieve the highest level of function possible. The use of BCIs allows the performance of closed-loop interventions where the brain is properly “synchronized” with the movement of the affected limb. These therapies focus on using the contingent association between brain activation during movement intention and peripheral feedback to facilitate the reorganization of the motor circuitry, and subsequently, promote motor recovery (Jackson & Zimmermann, 2012). For more insights check this post on motor neurorehabilitation.

When rehabilitation is not possible, BCIs can be used for motor restoration. In this case, the main goal is to regain the lost motor function by means of assistive technologies such as prosthesis, stimulators or robotic exo-skeletons controlled by a BCI. A common example is the combined use of EEG equipment to record the brain activity and identify motor-related commands, and functional electrical stimulation (FES) to stimulate the paralyzed muscles in such a way that the patient can grasp an object (Pfurtscheller, 2003).

Transitioning from the lab to the user’s home

Most of the studies and technological prototypes have been designed, developed and evaluated in research laboratories and hospitals. Figure 1 shows some examples from studies carried in R&D neurorehabilitation projects that Bitbrain has participated in.

However, the real ecological settings where these systems ultimately need to work is at home in order to

From Figure 1, we can see that there are some technological challenges to achieve the ecological use of Figure 2 where BCI can be used in everyday activities. The EEG equipment itself has been identified as a key technology required to enable such a transition and to increase acceptance from the end users.

Figure 2: BCIs based rehabilitation and restoration at home should be as minimally invasive as possible, easy to set up and accepted by the end users.

Together with our partners in the MoreGrasp EU project, we implemented a prototype of a BCI device for motor restoration at home. We packed all the technologies into an easy to use application and our SCI participants trained and used the system in their homes with minimal supervision (see Figure 3, the MoreGrasp webpage and our dedicated post).

Figure 3: The Moregrasp project put all the technology in the end users home.

EEG systems are the cornerstone for the effective introduction of BCIs in real-world applications outside the lab, as well as for the effective adoption in user-centered fields. In recent years, there have been strong R&D efforts in developing new EEG technologies with enhanced usability and comfort, without sacrificing reliability and accuracy. Our experience in the MoreGrasp project is that users want comfortable, wearable devices that are easy to set up and also aesthetically pleasing. Missing any of these aspects can reduce user acceptance and can be a barrier to the successful evaluation of the technology at home.

Based on this experience, in the last stages of the MoreGrasp project, we started the development of a novel EEG headset, the Hero, which was created to put the application and the user in the center of the design process. The main characteristics of the headset are: Figure 4: The Hero headset (top left) has only nine EEG sensors placed over the motor cortex (top right) which makes it possible to self handle it with just one hand and get a good EEG signal in less than two minutes (bottom).

All the ergonomic, aesthetics, and usability effort cannot compromise the technical requirements of the application: signal quality, sensitivity to EEG noise and artifacts, and stability of the sensor contact. So the next question is: Can we measure and decode brain signals with the Hero for motor rehabilitation and restoration?

Measuring brain activation during natural reaching with the HERO.

There are two main brain activity patterns that are normally observed during the actual execution of movements (or the attempt of movement in patients with paralysis):

It has been previously unclear whether the transition to the end users’ homes utilizing wearable EEG systems based on dry electrodes could be made successfully. In this sense, wearable EEG systems have to allow extracting the brain patterns (MRCPs, ERDs) with similar performance to their laboratory counterparts (stationary equipment with gel-based electrodes), while operating in a non-laboratory environment.

To assess its feasibility we carried out an experimental protocol in which 45 able bodied, right handed participants performed self-initiated reach-and-grasp actions on objects of daily life.

Each participant was recorded with a different technology:

Participants were instructed to perform self-initiated reach-and-grasp actions with their right hand towards two objects: a glass (palmar grasp) and a spoon within a jar (lateral grasp). They were then asked to focus their gaze on the object to grasp for at least 2 s before starting the movement. A total of 80 trials per condition were recorded, distributed in four runs (20 trials each). The location of the objects was switched between runs.

Figure 5. Hero system during the execution of the reach-and-grasp actions. The left image shows a lateral grasp. The right image a palmar grasp. The upper right corner shows the layout of the EEG electrode placement.

Regarding the MRCPs, a negative deflection can be observed in the MRCPs waveform at movement onset that starts around 0.5 s before the movement onset. Desynchronization patterns can be observed in the time-frequency ERD/S maps, with larger values in alpha (8-12) Hz and beta (15-25) Hz frequency bands. These two patterns are in line with the literature and similar to those obtained with stationary and gel-based systems.

For a detailed comparison with other types of technologies see (Schwarz, 2020), which also shows that, using the same number and location of sensors, the decoding performance is not statistically different from widely spread and standard EEG research systems.

The dataset is publicly available. Similar results are obtained with other protocols such as a P300 experiment (Escolano, 2020).

EEG systems are the cornerstone for the effective introduction of BCIs in real-world applications outside the lab, as well as for the effective adoption in user-centered fields. In recent years, there have been strong R&D efforts in developing new EEG technologies with enhanced usability and comfort, and without sacrificing reliability and accuracy, which are opening the door to new ways of human enhancement and restoration.