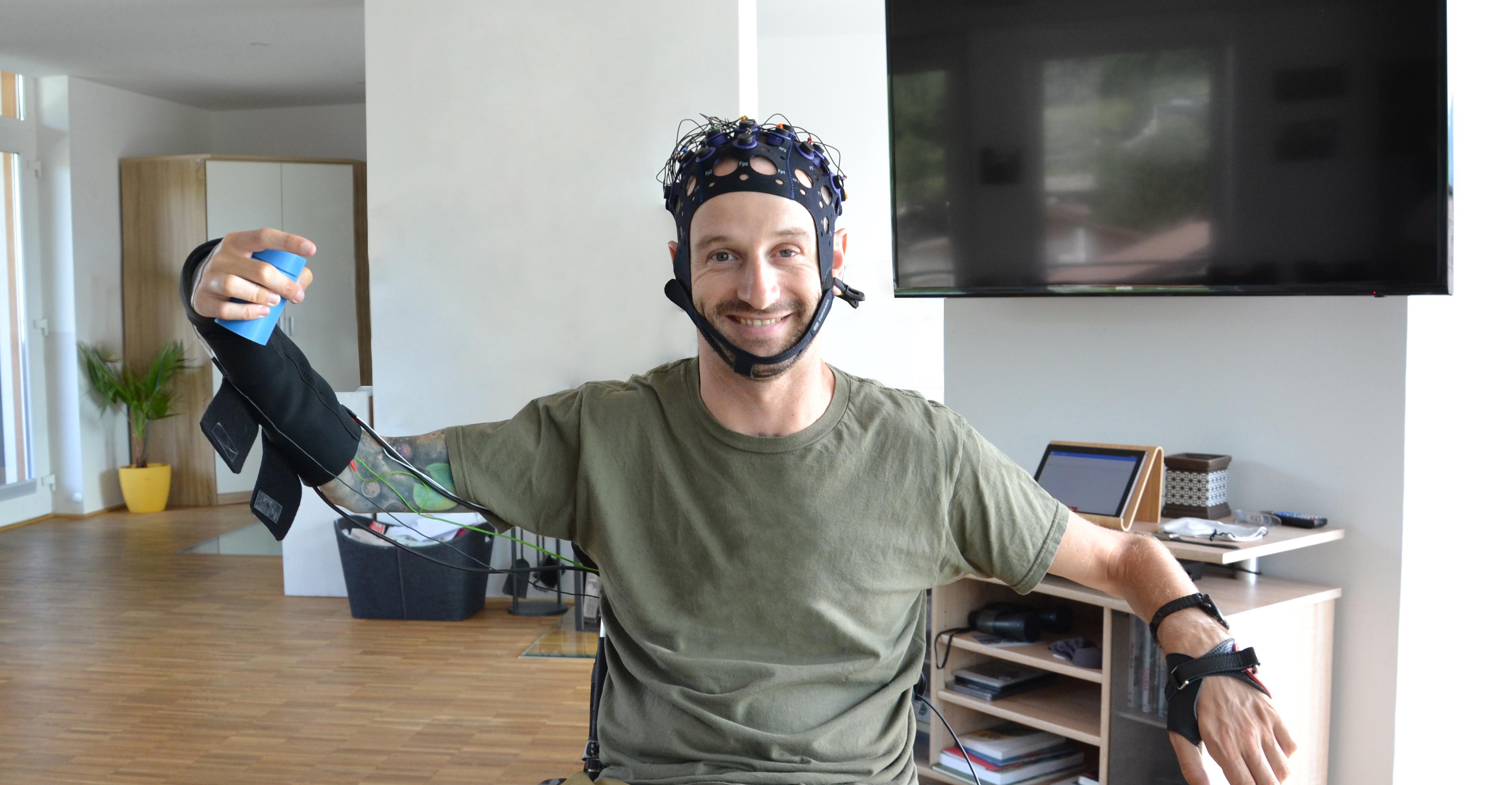 What is BCI? An introduction to brain-computer interface using EEG signals

Brain-computer interfaces (BCI) occupy an emerging field with the potential of changing the world, with diverse applications from rehabilitation to human augmentation. In this post, we will provide some insights into what BCIs are, how they are built, and what are the most promising applications that may be available in the near future.

What is a brain-computer interface (BCI)?

A brain-computer interface (BCI), also referred to as a brain-machine interface (BMI) or neural interface, is a system that establishes a direct communication between the brain and an external device (Lebedev & Nicolelis, 2017; Millán et al., 2010; J. R. Wolpaw et al., 2002). This term was first proposed by Professor Jacques Vidal in 1973 (Vidal, 1973), and since then, the number of developments and research articles describing brain-to-computer communication has grown exponentially.

The basic setup of a BCI system includes three components:

​​There are a wide variety of devices that can be controlled using brain commands, and they can be used in five ways: to replace, restore, enhance, supplement or improve some human function (J. Wolpaw & Wolpaw, 2012) The first component of BCI technology is a method to record the human brain signals. It could be considered the most relevant, since it determines aspects like the cost, the potential areas of application and the population that can use it. The activity of the brain can be measured with sensors implanted inside the body (invasive BCIs) or with external sensors (non-invasive BCIs)

fNIRS measures changes in blood oxygenation. Increases in blood oxygenation indicate that a brain area is more active. This technique has the limitation of providing a very low temporal resolution and is, therefore, not frequently used for BCIs. EEG and MEG, in contrast, allow higher temporal resolution, despite their low spatial resolution. MEG requires a large and expensive magnetometer. Generally, for non-invasive BCIs, EEG is the preferred technology due to its lower cost and portability. For this reason, most of the information contained in this post refers to EEG-based brain-computer interface technology.

Electroencephalographic activity is measured by placing electrodes at different locations over the scalp. The electrical signals are measured as the difference in voltage between two electrodes (usually one is a reference for all other electrodes). Measuring the activation of a specific brain region requires placing electrodes as close as possible to that area, and therefore electrodes placed at different cortical positions allow measuring different neural processes.

There are different patterns of brain activation that can be measured with EEG. Spontaneous—or ongoing—brain activity is the activity measured in the absence of any explicit task or stimulus. In contrast, induced activity appears as a response to an event, such as a sensory stimulus or a specific action (e.g., a motor response or mental processing).

EEG-based BCI systems rely on detecting changes in the brain patterns produced as a response to some voluntary or involuntary mental command. One of these types of neural processes are event-related potentials (ERPs), which appear as a response to external sensory stimuli. Some of the most common ERPs used for brain-computer interaction are the following:

The other type of neural process commonly used in BCIs do not require explicit stimuli, but are associated with internal brain events and can even be measured asynchronously (i.e., without evident information of when they start). There are two common phenomena in this category:

Progress in the field of artificial intelligence has prompted considerable improvements in how information is processed and decoded from EEG activity. Ultimately, an EEG-based BCI has to transform the voltage values measured through the electrodes into digital commands to control the corresponding device. In order to close-the-loop between the brain and the device, the BCI requires algorithms of signal processing, feature extraction, and pattern recognition.

Different research laboratories worldwide work on improving these three computing steps (signal processing, feature extraction, and classification/decoding), and to adapt different methodologies from the AI field to the particularities of EEG data. The classification methods have received more attention since their output is normally used for assessing the BCI performance (e.g., classification accuracy). In this regard, there is an enormous variety of classifiers that have been evaluated in the field of BCIs, from very simple linear thresholding to complex deep neural networks (Lotte et al., 2018).

Different types of applications require diverse AI approaches to maximize the success of the BCI. For instance, in some contexts, we want the users to learn and adapt their brain patterns towards a desired state (e.g., in neurorehabilitation, where we want to change the brain to induce some behavioral changes as a consequence). In that case, a simple linear classifier can be enough to guide the user by indicating if the activation over a specific brain region should be higher or lower. In contrast, some other applications, like the brain-control of a wheelchair, require more complex algorithms to maximize the decoding accuracy, adapting to the specific patterns of activity of each participant, and trying to minimize errors.

A widely accepted definition of BCI is: “a system that measures the Central Nervous System (CNS) activity and converts it into artificial output that replaces, restores, enhances, supplements, or improves natural CNS output and thereby changes the ongoing interactions between the CNS and its external or internal environment” (J. Wolpaw & Wolpaw, 2012).

A BCI for replacing a natural function can be used by people who, due to an injury or disease, have lost that function. For instance, a person who cannot walk could control a robotic wheelchair, or a person who cannot speak could use a brain-controlled communication device (Fernández-Rodríguez et al., 2016; Rezeika et al., 2018).

In 2009, the BCI team at the University of Zaragoza, founders of Bitbrain, presented a prototype of a wheelchair controlled with a BCI based on the P300 paradigm (Iturrate et al., 2009). The users had to focus their attention on specific targets in a 3-D representation of their environment, which were illuminated in a random order. After a few seconds, the system decoded where they wanted to go by analyzing the brain responses to each stimulus, and the wheelchair drove them to the desired location (see video with explanation).

A BCI can also be used to restore a lost function. For example, people with paralysis or limb weakness after a spinal cord injury can control exoskeletons or electrical stimulation to move their own limbs (AL-Quraishi et al., 2018). The MoreGrasp project, funded by the H2020 EU program and where Bitbrain was one of the partners, worked in this direction by developing a technology that allowed tetraplegic patients to control, with their brain waves, functional electrical stimulation of the muscles and nerves that move their paralyzed hand. The video below shows a brief description of the project.

While these two first fields of application refer to patients with motor impairment, BCIs have also been devised as a way to improve the capabilities of healthy people. However, BCIs for enhancing or supplementing human functions have received less attention until now. This is because improving the quality of life of impaired people needs little further justification, but augmenting human natural functions raises important ethical concerns and debates (Yuste et al., 2017).

An example of supplementing functions could be, for example, controlling a third (e.g., robotic) arm with brain activity. A bit less extreme is the case of enhancing functions, which means that a natural brain output is processed to enhance our abilities. For instance, the natural brain response after observing a machine committing an error could be used to improve that machine; or measurements of attention/distraction during a long task like driving could be used to alert the driver when attention is lost. In 2018, Nissan in cooperation with Bitbrain presented the first prototype of Brain-to-Vehicle interface, in which the driving experience was enhanced by anticipating the driver decisions after detecting specific event-related potentials.

Finally, interventions based on BCI can be used to improve some functions. For example, people suffering a stroke can experience damage to the central nervous system that causes upper-limb paralysis. A BCI that links brain activation during movement intention with peripheral feedback on the paralyzed limb can exploit activity-dependent plasticity mechanisms to improve the function of the patient (López-Larraz et al., 2018).

The first time that a BCI was scientifically demonstrated to have rehabilitative effects in stroke patients was in 2013 by a research team at the University of Tübingen (Ramos-Murguialday et al., 2013). The association of specific brain patterns with congruent feedback, also known as neurofeedback, has the potential to help reorganize brain circuits, leading to improvements in neuropsychiatric disorders like attention deficit and hyperactivity, but also for cognitive enhancement in healthy populations (Sitaram et al., 2017).

Worldwide initiatives towards open science have favored that more and more research laboratories publish their datasets with their papers. It is, therefore, possible now to push the BCI field forward from a computational or machine learning point of view, without the need of having expensive equipment for recording EEG. The BNCI Horizon 2020 website hosts a database of open access BCI datasets, as well as links to other repositories, like the BCI competitions. The website of Prof. Fabien Lotte (Research Director at Inria Bordeaux) also contains a detailed list of links to publicly available BCI datasets for download.

Open scientific repositories like Figshare, Zenodo or Dryad are gaining attention and their use is recommended even by renowned journals like Nature. These repositories host a growing number of accessible EEG-BCI datasets, which can be accessed by their own search engine. Furthermore, specialized tools like the Dataset Search by Google find datasets stored across the Web, like those published in the previously mentioned repositories, as well as in open access journals or platforms like ResearchGate.

Communication between brains and machines sounded like science fiction until a few decades ago. Joint efforts by engineers, neuroscientists, and clinicians have led to impressive advances in the field of brain-computer interfaces, including the control of wheelchairs, robots, prosthetic limbs, and even implantable stimulators. So far, most of the progress in this field has been done in research environments as proofs-of-concept, and some small-scale clinical trials have provided very promising results for patients with different neurological diseases.

We foresee that in this decade, we will see actual BCI systems reaching the market for clinical and consumer applications. This will come as a result of R&D milestones that are expected to occur in the next few years:

Eduardo López-Larraz obtained his engineering degree in computer science (2009) and a MSc in biomedical engineering (2011) by the University of Zaragoza (Spain). In 2015, he received the Ph.D. degree in biomedical engineering by the joint program between the Polytechnic University of Catalonia and the University of Zaragoza. From 2015 to 2019 he worked as a postdoctoral researcher at the Institute of Medical Psychology and Behavioral Neurobiology, University of Tübingen (Germany). Since 2020, he works as a research scientist for Bitbrain. He has participated in 9 research projects in Spain and Germany, co-authored more than 40 scientific papers in top journals and international conferences, co-supervised 8 students, and conducted research stays in Japan, Spain, and Germany.  His main research interests are focused on the use of neural interfaces for neuro-rehabilitation, machine learning, and signal processing applied to biosignals.